THE OPENING CEREMONY
By Brian Falkner

Now it's your turn to write Chapter Two. You need to include two things in chapter two. You will write about the aftermath of the blackout at the opening ceremony, and the children will begin to investigate what is happening.

You can read the winning child's chapter and the judge's report on the Winning Writing Page.
Posted by FaBo Story No comments:

Email ThisBlogThis!Share to TwitterShare to FacebookShare to Pinterest
Labels: Brian Falkner, Chapter One 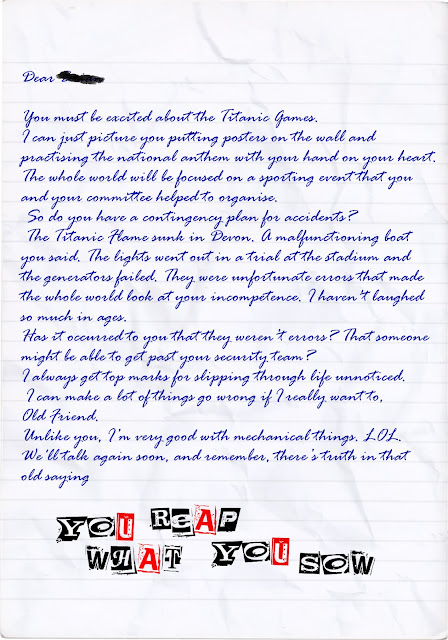 Posted by FaBo Story No comments:

Welcome to the third interactive novel-writing project dreamed up by a crazy team of your favourite Kiwi authors. Each week you can pit your writing wits against one of our FaBolous team. If you think you can out-imagine, out-write and out-FaBo the FaBo Team, write your own version of the next exciting chapter and send it in to fabostory@gmail.com. We double-dare you!

FABO STORY 3 begins with a letter posted on the blog on Monday 16 July - a letter that threatens to disrupt the biggest sporting event in world history - the TITANIC GAMES.

Who wrote the letter and to whom? Why would they make threats? It's your job to write a follow-on chapter. YOU decide what the story is about, who the characters are, and what happens to them next. Each week, you will read the chapter written by an author on the FaBo team. It's your job to write the next chapter in the story (up to 1000 words) and send it to fabostory@gmail.com in the body of your email (not as an attachment) by 5pm on Friday each week. The winning chapter will appear on Monday at the same time as a new chapter by one of the children's authors. From then on, every week is another episode in a big, dark writing adventure.

By the end, you will have used your imagination and sleuthing skills to figure out who the villain is and how to stop him or her from destroying the Titanic Games. Are you ready to compete? Let the Titanic Games begin!

We advise PARENTAL or TEACHER guidance because this FaBo Story might scare the living daylights out of all of us.

However, all characters, places and events appearing in this blog are fictitious, so we shouldn't have nightmares about them.

The Writers and Illustrators